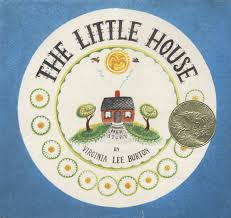 This is one of the most touching and lovely storybooks that you could ever read. The Little House is a 1942 book written and illustrated by Virginia Lee Burton. It won the Caldecott Medal in 1943.

The story centers on a house built at the top of a small hill, far out in the country. Her builder decrees that she "may never be sold for gold or silver" but is built sturdy enough to one day see his great-great-grandchildren's great-great-grandchildren living in her. The house watches the seasons pass, and wonders about the lights of the city, which grow ever closer.

Eventually a road is built in front of the house. This is followed by roadside stands, gas stations, and more little houses. Next, the small houses are replaced by tenements and apartments. Streetcars, an elevated railroad, and a subway appear to surround the house. Finally, two gigantic skyscrapers are built—one on each side; now living in the city, the house is sad because she misses being on the small hill in the countryside and that her exterior looks shabby due to no one living in her and the city's environment.

One day the great-great-granddaughter of the builder sees the house and remembers stories that her grandmother told about living in just such a house, albeit far out in the country. When the great-great-granddaughter discovers that it is the same house, she arranges to have her moved out of the city, to a hill in the country where she can once again watch the seasons pass and live happily ever after.