Ages: 6+
About The Show: Kylie Carson has a problem. She loves monsters movies, zombies thrillers, and vampire sagas but her classmates at her new school avoid her like the Creature from the Black Lagoon! To sweeten up her image Kylie starts a Cupcake Club. With the help of her new friends they begin spinning out tasty treats. But when Meredith, the most popular girl in school, tries to sabotage the big cupcake party, it may spell the end of the Cupcake Club. Based on the hit chapter book Peace Love and and Cupcakes, The Cupcake Club by Sheryl Berk and her 11-year-old daughter Carrie Berk. The musical is appropriate for ages 6 - 12 years old.
Website: http://vitaltheatre.org/peaceloveandcupcakes.php 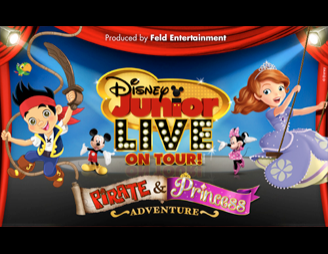 About the Show: Grab your tiaras and doubloons and join us for Disney Junior Live On Tour! Pirate & Princess Adventure. Mickey and Minnie are taking their seats too at this never-before-seen live show featuring your favorite characters from Disney Junior's hit series, Sofia the First and Jake and the Never Land Pirates. Get swept up in the excitement as Sofia and her family prepare for a royal celebration that helps us all learn the true meaning of being a princess with a special appearance by Cinderella.

Then it's off to Never Land where Jake and his swashbuckling friends Izzy and Cubby, with a little help from Peter Pan, battle Captain Hook to unlock treasure hidden inside a mysterious volcano. It's danger and dueling on the high seas as Jake discovers what it takes to be a true hero. Filled with new music, amazing effects, thrilling action and endless surprises, your family will sing, shout, and soar into the action when Disney Junior Live On Tour! Pirate & Princess Adventure sails into your town.

3) Fluff: A Story of Lost Toys

About the Show: Presented by Cre8ion from Brisbane, Australia

Welcome to the mad, mod world of the Ginghams, a trio who travels to bring long-lost misfit toys into their home. Fluff was dropped under the couch, Squibbly was abandoned in the gutter and Disco Frog was caught in a ceiling fan. But don't fret, dear pet! With a comedic, quirky and colorful mix of sound, story, video and vacuum, toys get discovered and recovered by the plaid-patterned family.

About the Show: Pinkalicious can't stop eating pink cupcakes despite warnings from her parents. Her pink indulgence lands her at the doctor's office with Pinkititis, an affliction that turns her pink from head to toe - a dream come true for this pink loving enthusiast. But when her hue goes too far, only Pinkalicious can figure out a way to get out of this predicament.

About the Show: After much demand, that little caterpillar is returning, along with an assortment of favorite puppet characters. The triple-bill includes the wonderful story of The Very Hungry Caterpillar's metamorphosis into a beautiful butterfly; the fanciful account of Little Cloud's travels through the sky, and the Mixed-up Chameleon's discovery of his own unique nature. The whimsical tales have enchanted several generations, and Mermaid's acclaimed stage adaptation teaches as well as entertains.

About the Show: Sid the Science Kid, the popular PBS Kids television show produced by The Jim Henson Company, comes to life in this incredible live stage experience! Kids and parents alike will be thrilled as Sid, May, Gabriela and Gerald come to their town to discover the excitement and curiosities of the world! With mysteries to explain and wonders to discover, Sid and his friends set off on a day of excitement and adventure, asking curious questions and finding cool answers.