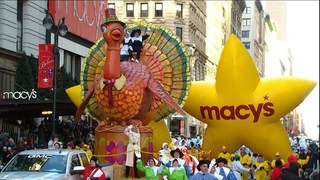 Macy's Thanksgiving Parade @ NYC
When: Thursday Nov 26 2015 9am-Noon
Details: The 89th Annual Macy's Thanksgiving Day Parade returns to march down the streets of New York on Thursday, November 26. There are three recommended stretches or spots on the route for watching the parade: the first leg along Central Park West, Time Warner Center and, finally, along Sixth Avenue between Central Park South and 38th Street.

Frosty Day @ Armonk, NY
When: Saturday Nov 28 2015 12pm-4pm
Where: Armonk downtown
Details: The kids love hearing that Frosty the Snowman grew up in Armonk. Then they get to go on a train ride, sip hot cocoa, take part in a scavenger hunt, get their face painted, watch a parade. Of course, Frosty will be on hand for pictures, and Armonk will light their tree.

Westchester Winter Wonderland @ Valhalla
When: Nov 27-Jan 3 2015 5pm-10pm
Where: Kensico Dam Plaza, Valhalla
Details: You can meet Santa, go ice skating, take a walk down Candy Cane Lane (towering illuminated candy canes line the walkway), or take a hay ride and catch the musical light show. This event was such a hit last year, they decided to bring it back, and it looks even better. There’s also shopping as well as dinner or hot cocoa, if you need a nosh. Admission is $15 per person.

Cuba Vibra @ New Victory Theater
Where: New Victory Theater, 42nd Street, NYC
When: Now through Nov 29 2016
Details: It's a hot Havana night when Lizt Alfonso Dance Cuba brings the heat in an irresistible fusion of ballet, flamenco, cha-cha, rumba, conga, bolero and salsa. With superior synchronicity, 18 dancers fill the stage with flavorful finesse as they seamlessly dance in lockstep to the Afro-Cuban beats and vocal virtuosity of an on-stage big band. Celebrating Cuban music and dance from the '50s to today, boisterous Latin rhythms electrify the air in CUBA VIBRA!

Big Apple Circus @ Lincoln Center
When: Now through Jan 10, 2016 (Saturdays 12:30pm and 4:30pm)
Where: Lincoln Center Damrosch Park 62nd St, New York.
Details: Show time is approximately 2-hours. The big top of the Big Apple Circus, crammed into a corner of the Lincoln Center plaza, is not exactly gargantuan. But it’s large enough to host prancing stallions, capering dogs, a couple of clowns, a score of swirling hula hoops and throngs of leaping acrobats. This year’s show, “Big Apple Circus: The Grand Tour,” is friendly, beguiling and emphatically humane, from the smallest poodle to the tallest stilt walker.

George Balanchine's Nutcracker @ Lincoln Center
When: Now thru Jan 3 2016
Where: David H. Koch Theater @ Lincoln Center, NYC
Details: Tschaikovsky’s iconic score transports you to a world of wonder where mischievous mice are foiled by toy soldiers come to life, and a blizzard of ballerinas reveals the enchanting Land of Sweets. This is “the mother of all Nutcrackers” (The New Yorker) — the version that originated a beloved American tradition. The performance is 2 hours.